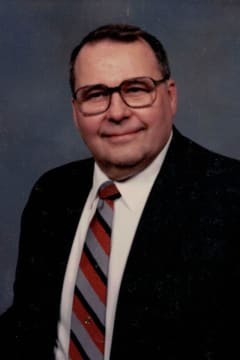 Alan R. McMullen died at his home on Monday, May 30, 2022. He was born on November 1, 1932, in Elyria, Ohio. Alan graduated from Ohio University in Athens, Ohio with a bachelor’s degree in chemistry. He held positions at the Lubrizol Company in Cleveland as well as positions at the Campbell Soup Company, Hunts Foods, and the Ohio Match Company before his employment at the Hoover Company. Alan spent most of his career at the Hoover Company in North Canton as a chemist and retired in mid-1990. Alan served as an assistant leader and boy scout badge counselor for the boy scout troop at Canton, Ohio where he served as president of the congregation, elder, and deacon. He was a member of the Greater Canton Men’s Chorus with a highlight of singing at the National Cathedral and the Kennedy Center in Washington, D.C. Alan is survived his wife, Lois, of 67 years, daughter, Lisa McMullen, brother, Dan McMullen, sister, Sue McNeal, grandchildren, Katherine and Andrew Jones, Matthew McMullen, and Lorraine Leet, and five great grandchildren. Alan was preceded in death by his son, Rev. Todd Alan McMullen, his parents, Carl and Lillian McMullen and sister-in-law, Joyce McMullen. His favorite pastime was playing golf. A private family service will be held. Contributions can be made in his honor to Community Christian in North Canton, Ohio, to St. Jude’s Children’s Research Hospital. THE WEBSTER FUNERAL HOME is serving the family. Online condolences can be made at www.websterfuneralhomes.com