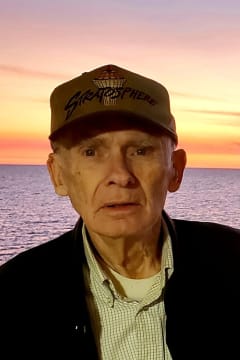 Arvil E. Erwin age 86 of Cincinnati passed away Tuesday April 12, 2022 in his home. He was born July 22, 1935 in Olive Hill, Kentucky the son of the late Arvil and Wilma (nee Meade) Erwin. Mr. Erwin was a veteran of the United States Marine Corps serving in the Korean War. He worked as a foreman for Cincinnati Book Bindery. After retirement Mr. Erwin, his wife Hilda, his brother Bill, and Bill’s wife Debbie owned and operated Erwin’s Catering in Covington, Kentucky. He was a member of the Harrison, Ohio American Legion Post #0199. He enjoyed boating, riding motorcycles, and was an original season ticket holder of the Cincinnati Bengals. Mr. Erwin is survived by his wife Hilda Erwin; children Deborah (Robert) Armontrout, Susan Huffman, Sandra Sauerwein, Tina (Andy) Propes, and the late Arvil E. Erwin, Jr.; thirteen grandchildren; ten great grandchildren; and one sister Rose (Harold) Smith. He was also preceded in death by his sister Verna Parker and his brother Bill Erwin. Mr. Erwin will be recognized with military honors at 7:00 PM on Thursday April 28, 2022 at Veterans Park followed by a Celebration of Life next to the park at the Michael Colligan Lodge. https://www.hamiltonparks.net/michael-j--colligan-lodge THE WEBSTER FUNERAL HOME, Fairfield is serving the family. www.websterfuneralhomes.com