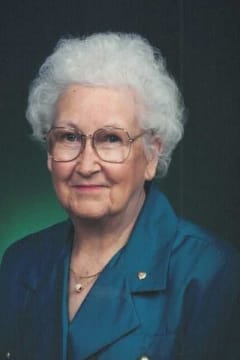 Betty Whalen, age 96 passed away Sunday May 16, 2021 at Fairfield Place in Fairfield. She was born May 5, 1925 in Harrison, KY the daughter of the late Joe Dennis and Bessie (Brunker) Dennis. Her parents already had 2 little boys, and were delighted to now have a pretty little brown-eyed girl. Betty lost her mom at age 2 and was raised by her grandmother Sallie Brunker. On July 3, 1943 she married Wayne Whalen in Cynthiana, Kentucky and he preceded her in death on September 12, 2010. After starting their life together in Cynthiana, they moved to Hamilton, OH in the mid 1950’s. Betty worked jobs as a clerk in stores, and as a general laborer in factories. She started her most important job in 1964, as mom. Betty partnered with her husband as he served as interim pastor at several Churches of God including Lebanon, Maud, Mason, Ross Avenue, and Elizabethtown where she would do visitation, teach Sunday School, and work in the nursery. She was a member of Bridgewater Church in Hamilton, OH and was active at Camp Lebanon. Betty enjoyed college basketball and the Kentucky Derby, but in the world of sports the Cincinnati Reds were her greatest love. Betty is survived by her son Dennis (Lela) Whalen; step grandchildren Ashley, Christopher, and Kyle, many nieces and nephews, and very close friends, the Palluconi family and Wanda Varner. Betty was also preceded in death by her brothers Leo and J. B., and dear aunt Sylvia Goehegan. Betty’s family would like to express their sincere thanks to every person that helped care for her at Fairfield Place. They are amazing people and their kindness and care made Betty’s final 2 years the best they could be. Visitation at THE WEBSTER FUNERAL HOME 3080 Homeward Way at Rt. 4, Fairfield on Wednesday May 19, 2021 from 6:00 PM until the time of the funeral service at 7:00 PM, with Pastor Drew Wilkerson, officiating. Burial will be on Thursday May 20, 2021 at 11:00 AM in Battle Grove Cemetery, Cynthiana, Kentucky. In lieu of flowers contributions would be appreciated to the Missions ministry at Bridgewater Church, 3100 Princeton Road, Hamilton, Ohio 45011. www.websterfuneralhomes.com