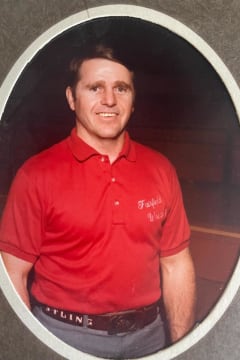 On Sunday, May 29th, 2022, loving husband, father, grandfather, and coach Ronald J. Masanek passed away at the age of 80. Ron was born on August 13th, 1941, in Cleveland, Ohio, to Julia Kazol Masanek and Julian Masanek. Ron grew up in Parma, Ohio, and worked in his father’s restaurant as a young man. He attended Parma High School (graduated 1959), where he was a member of the wrestling team. Later, he went to Miami University in Oxford, Ohio, on a wrestling scholarship and became a two-time Mid-American Conference wrestling runner-up and a two-time collegiate national qualifier. At Miami, Ron also earned a master’s degree in education in 1964 and met his beloved wife of fifty-five years, Stephanie Smith Masanek. Ron went on to teach history at Fairfield High School for thirty-six years. At Fairfield, Ron served as the head wrestling coach for forty-eight years, the longest tenure of any high school coach in the Cincinnati area. During his coaching career, Ron compiled 403 dual wins, 11 undefeated dual seasons, 23 Greater Miami Conference (GMC) championships, 200 GMC champions, 127 sectional champions, 42 district champions, 150 state qualifiers, 43 state placers, and 9 individual state championship titles. In addition to wrestling, Ron devoted his life to his family and enjoyed gardening, golfing, and fishing. Ron was also a faithful Catholic and attended Sacred Heart Parish in Fairfield. Ron is survived by his wife Stephanie Smith Masanek, his sister Donna Masanek Prochko, his daughters Mikie Masanek and Charlie Masanek, and his grandchildren James Masanek and Sarah Krusinski.

Ron Masanek’s services include:
The visitation will be Friday, June 3rd, from 11:00 a.m.- 3:00 p.m. at Fairfield High School Arena. Please wear red! The funeral mass will be held at Sacred Heart Catholic Church at 4:00 p.m., following the visitation. We are so touched by the tremendous amount of love and support we have received from everyone in the community. It is truly a blessing to know the impact Ron has had on so many lives. In lieu of flowers, there will be a Fairfield wrestling scholarship fund donation collected at the visitation. Thank you for your love, kindness, and graciousness. THE WEBSTER FUNERAL HOME, Fairfield is serving the family. www.websterfuneralhomes.com