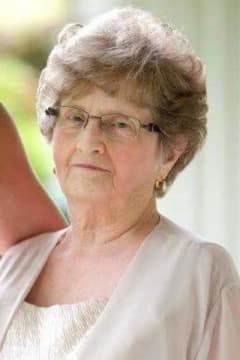 Barbara C. Chandler age 83 of Fairfield passed away Wednesday May 27, 2020. She was born August 20, 1936 in Dodsonville, Ohio the daughter of the late James Reed Copeland and Wilma (nee Dick) Copeland. On June 15, 1957 in Hamilton, Ohio she married John F. “Jack” Chandler and he preceded her in death in 1999. Mrs. Chandler was a 1954 graduate of Hamilton High School and a Miami University graduate as well. She taught elementary school for 37 years, 33 of which were in the Hamilton City Schools, retiring in 1993. She kept in close contact with her fellow teachers in retirement. She was a member of the Fairfield Church of Christ, the Order of Eastern Star Washington Chapter #195, and Delta Kappa Gamma. Mrs. Chandler is survived by her two daughters Helen (Jay) Meyer and Nancy (Jeremy) Fields; and two granddaughters Taryn (Cody) Stoeppel and Taylor Johnson. She was also preceded in death by her brother Robert Copeland. Visitation at THE WEBSTER FUNERAL HOME 3080 Homeward Way at Rt. 4, Fairfield on Monday June 1, 2020 from 5:00 PM until the time of the funeral service at 7:00 PM. Private burial in Rose Hill Burial Park. www.websterfuneralhomes.com

Mrs. Chandler was my second grade teacher at Lincoln Elementary School. She taught us how to write cursive from the printed word and read Mr. Poppin's Penquins to us. She was great - my sympathies to her daughters.
- Joni Lauer Copas
Mrs. Chandler in my opinion was the best teacher a child could have. She was stern but loving and gave extra attention to children that struggled. My oldest son was lucky to her as a teacher. In July 2010 I lost my youngest son, this sweet wonderful woman came to his visitation. I loved this marvelous woman who spent her life educating others children. I know one thing she's in heaven hopefully teaching the chi.
- Denice Peters
So so sorry. Barb was a great friend and a phenomenal teacher. She taught me a lot about what it meant to be a good teacher. She will be missed especially when it's time for the ORFS to meet for lunch.
- Carolyn Sloneker
With sincere sympathy. Helen and Dave Campbell
- Helen Campbell