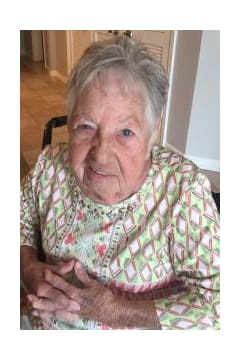 Bertie Lou Davis age 90 of West Chester passed away on Tuesday January 8, 2019. She was born on August 8, 1928 in Brown County, Oh the daughter of the late James and Mae (nee Richards) King. She was married to Jack Davis and he preceded her in death in 2013. She is survived by one daughter Linda (Steve) Kessler; one granddaughter Ann (Walt) Lubbers; three great grandchildren Henry, Paul, and Charlie. She also leaves behind many nieces, nephews, and close friends. She was also preceded in death by seven siblings William King, Larry King, Richard King, Don King, Evelyn Arnold, Annetta Rhodes, and Bernice Derby. THE WEBSTER FUNERAL HOME 3080 Homeward Way at Rt. 4, Fairfield is serving the family. Bertie will be laid to rest in February, 2019 at Dayton National Cemetery with her husband Jack. www.websterfuneralhomes.com

Please share a condolence, photo or memory of Bertie. We welcome all condolences that are positive and uplifting that will help family and friends heal.