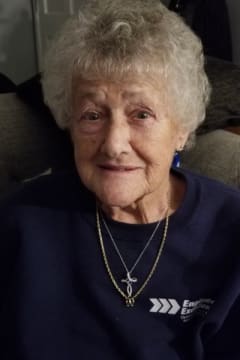 Obituary For Betty A. Morgan

Betty A. Morgan age 86 of Sharonville passed away on Saturday November 21, 2020. She was born on September 7, 1934 in Grant’s Lick, KY the daughter of Louis and Gracie (nee Hendricks) Hafer. She was married to James Morgan and he preceded her in death. She is survived by seven children Linda (Robert) Durham, Barbara Gilliam, Debbie (Steve) Schatzle, Betty (Dean) Arroyo, Bobbie (Felcher) Ross, Tracy (Rick) Luttell, and Jackie (Rodney) Phillips-Mason; twenty one grandchildren; eighteen great grandchildren and two on the way; three great great grandchildren and one on the way; four siblings Martha Lou Lyons, Josephine Cook, Pauline Lehmenkuler, and Terry Hafer. She also leaves behind many nieces, nephews, other family and close friends. She was also preceded in death by two sons Tony Hewson and Bill Hewson; three grandchildren Xavier Arroyo, Jeff Ross, Tony Durham; and three sons in law Jimmy Phillips Sr, Scott Ross, and James Gilliam Sr. Online condolences may be made at www.websterfuneralhomes.com

When I bought a 5 speed and didn't know how to drive it, got stuck on a bush in the driveway. We never laughed so hard. I will miss her and so sorry for your loss prayers for you and your family
- Debbie Haynes
I am so very sorry for your loss. I will always remember the firts time I met grandma and Pappy when I moved to Runyan Dr I can't forget all the times we sat and drink coffee and talk. I will also remember how you love the coconut cream pie from big boy. I can't believe you are gone grandma we will miss you Emmy is heartbroken remembering all u guys trips to Kroger and cvs we love you and miss you.
- Maria E. Coria.