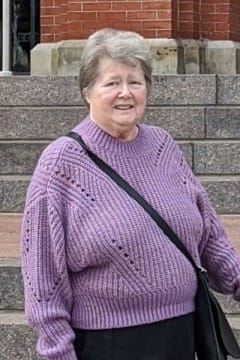 Deborah L. Wedder age 71 of West Chester passed away on Thursday October 1, 2020. She was born on December 16, 1948 in Hamilton the daughter of the late Adna and Helen (nee Rigsby) McClellan. Deborah married Mark Wedder on November 12, 1970. She is survived by her loving husband of over 49 years Mark Wedder; one son Mark (Lauren) Wedder; one granddaughter Norah Wedder; nine siblings Steve (Carol) McClellan, Janet McClellan-Cornett, Cathy (Larry) Barger, Tom McClellan, Jim (Charity) McClellan, Anne (the late Carl) Schiefer, Carolyn (Kenny) Saylor, Chris McClellan, and Lori McClellan Reed. She also leaves behind many nieces, nephews, other family and close friends. There will be no visitation. Online condolences can be made at www.websterfuneralhomes.com

Mark, and family, please accept my heartfelt condolences on your sudden loss. Mark I know we haven't talked since we met at Perkins for breakfast, but I always knew how you were from keeping in touch with your wife.i wish I had met her because I really enjoyed bantering with her on facebook about the Democrats.lol please try to stay in touch with me. I know I had to look you up, but you have my phone number.call any time.
- Mike Hynes