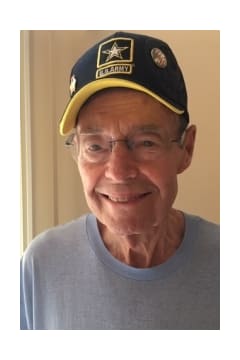 Edward F. Gentry age 94 of Fairfield passed away Saturday December 21, 2019. He was born September 9, 1925 in Hamilton, Ohio the son of the late Roy and Ella Jane (nee Lakes) Gentry. Mr. Gentry was a decorated Staff Sergeant in the U. S. Army during World War II, and was a Bronze Star recipient. He worked at Fernald as security supervisor for 36 years. He was a member of the Washington Masonic Lodge #17 in Hamilton and the Scottish Rite. Mr. Gentry was known as a compassionate and caring person who will be sadly missed by his family and many friends. He is survived by his beloved wife of 72 years, Betty (nee Johnson) Gentry; one son Dale (Vicki) Gentry; one daughter Debbie (Mike Deffinger) Judd; two grandchildren Erv (Natasha) Gentry and Kevin Judd; one great grandson Victor Gentry; three step grandchildren Maria Deffinger, Sarah Deffinger, and Elizabeth (Gene) Culver; three step great grandchildren Ember Martin, Vincent Culver, and Luna Culver; one sister Barbara Sue Wagers, and many nieces and nephews. Visitation at THE WEBSTER FUNERAL HOME 3080 Homeward Way at Rt. 4, Fairfield on Saturday December 28, 2019 from 9:00 AM until the time of the Masonic Service at 11:00 AM. The funeral ceremony will follow with Amy Gray, officiating. Burial to follow with full military honors in Rose Hill Burial Park. In lieu of flowers, memorial contributions would be appreciated to Safe Haven Farms, PO Box 633, Monroe, Ohio 45050. www.websterfuneralhomes.com

My condolences and prayers to Edwards Family and friends. Barbara has so many sweet memories and I have been lucky to hear some of those stories. While taking care of her. Shellina Thomas LPN
- Shelly Thomas
Dave and I offer our sincere condolences on your loss. Ed always wore the same smile that is in his photo. He was a sweet, pleasant gentleman. His presence in the neighborhood contributed to the wonderful place it is to live. We will think of him often and miss him greatly.
- Kathy Dove