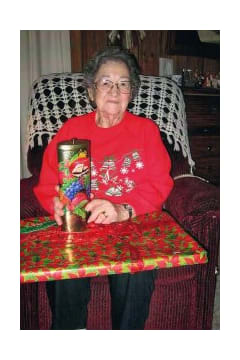 Eva M. Hetrick age 96 of Hamilton passed away Wednesday December 18, 2019. She was born March 28, 1923 in London, Kentucky the daughter of the late Jess and Bertha Hammons. She was married to Harry Hetrick, Sr. and he preceded her in death in 1984. Mrs. Hetrick was a charter member of the Fairfield Church of Christ. She owned and operated restaurants in the area for many years including the Tiny Diner in Hamilton, the Homette restaurant, the Town House near the Fenmont Center in Hamilton, and the Fairfield Truck Stop. She is survived by her son Harry (fiancé Tonya) Hetrick Jr., her granddaughter Kendra (Dan) Catherman, stepson Larry (Renate) Hetrick, her beloved nieces of London, KY; Mary Jane, Anna Sue, Eva, Shelby, and Jessie; her nephew Don of Marietta, GA; her 14 step grandchildren and many, many, many great grandchildren. Mrs. Hetrick was preceded in death by her parents, two stepsons Dick and Ron Hetrick, daughter-in-law Brenda (Hetrick) three brothers; Virgil, Claude, and Coleman; two sisters Nellie and Lorene. The family would like to thank the Vitas staff at the Drake Center for their compassion and support. Visitation at THE WEBSTER FUNERAL HOME 3080 Homeward Way at Rt. 4, Fairfield on Saturday December 21, 2019 from 10:00 AM until the time of the funeral service at 11:00 AM, with Pastor Brian Schreiber, officiating. Burial to follow in Millville Cemetery. In lieu of flowers memorial contributions would be appreciated to the Fairfield Church of Christ, 745 Symmes Road, Fairfield, Ohio 45014. www.websterfuneralhomes.com

Please share a condolence, photo or memory of Eva. We welcome all condolences that are positive and uplifting that will help family and friends heal.