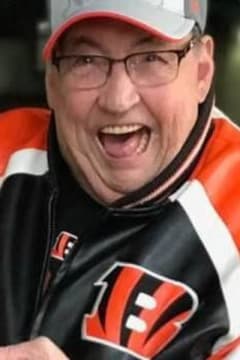 Harold Kermit Humfleet age 75 of Hamilton passed away Tuesday February 2nd, 2021. He was born February 20th 1945 in Grays, Kentucky to the late Harold and Ruth Humfleet. Harold was a dedicated Bengals and wrestling fan. He was a member of St. Clair Ave Baptist Church in Hamilton, Ohio. He was married to Vicky Humfleet for 38 years, who survives him. He is survived by two daughters Felicia Humfleet and Ruthie (Dan) Price; many adopted children who called him pops; two grandchildren James and Peylynn; many more adopted grandchildren; sister Charlotte Burbage; nieces and nephews; two special friends Greg Campbell and Levon Ross and many other family and friends. He was preceded in death by his parents, two sisters Barbara and Theresa, nephew Jeff, and good friend Carl Ross. He leaves behind his animals Kitty, Whiskers, Tiny Coco, and Sox. Visitation at St. Clair Ave Baptist Church 695 St Clair Ave Hamilton 45015 Friday February 19th from 11AM until the time of the funeral service at 1PM with Pastor Ty Choate and Pastor Jim Cecere officiating. Burial to follow in Hickory Flat Cemetery. The Webster Funeral Home, Fairfield is serving the family. www.websterfuneralhomes.com

I remember showing up to the wrestling shows and everything u saw me u had a smile on your face and you'd always hollar at me from across the room sometimes you'd say...HEY GIRL HOW U!!! you always had a smile and the warmest hugs. The Halloween trunk or treat u took toby to with ruthie and Dan and mama Vicky was a lot of fun too and the Halloween party at the house. Even if our memories r short lived the ones I made I will forever cherish. FLY HIGH PAPA HEROLD I LOVE U AND I MISS U
- Mallory lepera
Kermit, you will be missed by many. We will see you again when we all take our trip Home! You and Vicki were excellent neighbors and I am blessed to have known you both.
- Patrick DeLess