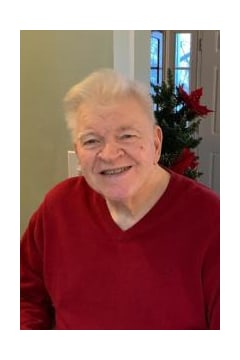 Homer D. “Bud” Fink Jr. age 81 of Fairfield passed away on Monday September 30, 2019. He was born on June 10, 1938 in Wellston, OH the son of the late Homer and Gladys (nee Wilbur) Fink Sr. On April 18, 1981 he married Elsie Buckler. Homer was a 1956 graduate of Hamilton High School. He retired from City of Fairfield Police Department in 1989 after 37 years of service. He also worked for the Butler County Sheriff’s Office from 1989-2004 as a Sheriff’s Deputy. Homer was a member of Hilltop Baptist Church. He is survived by his loving wife of over 38 years Elsie Fink; five children Chuck (Renee) Fink, Delores Fink, John (Robin) Fink, Leslie (Scott) Fredricks, and Laurie (Tom) Gerhardt; 15 grandchildren; and 13 great grandchildren. He also leaves behind many nieces, nephews, other family and close friends. Homer was also preceded in death by his son Jimmy Fink; five siblings Jane, Gretchen, Ethel, Teeney, and Bill. Visitation will be on Thursday October 3, 2019 at THE WEBSTER FUNERAL HOME 3080 Homeward Way at Rt. 4, Fairfield from 5:00PM- 8:00PM. Funeral service will be on Friday October 4, 2019 at Mentor Baptist Church 3724 Smith Rd. California, KY 41007 at 10:00AM with Pastor Barry Wilson officiating. Burial to follow in Grand View Cemetery in Kentucky. In lieu of flowers donations can be made in Homer’s name to American Heart Association at American Heart Association/ American Stroke Association 300 S. Riverside Plaza Ste 1200 Chicago, IL 60606-6637 or at www.heart.org or to Hospice of Cincinnati at Hospice of Cincinnati P.O. Box 633597 Cincinnati, OH 45263 or www.hospiceofcincinnati.org. www.websterfuneralhomes.com

Goodbye my friend, I'll never forget all that you taught me. During the years we worked together, I had the time of my life and I will cherish all the memories forever. God Bless
- Ed Roberts
We had alot of fun back in the day when Mom(MaryJane) said we was going to "Bud and Sudies we knew we would have fun. Bud always made us laugh sometimes til we cried. He was always there to help Mom later when she needed him,fix her flat tire,and put a air conditioner in her window. Now maybe they can all be together and play cards with Grandma she'd like that.
- Teresa
My condolences to the family of Bud Fink. I worked with him at the Fairfield Police Department for several years. Bud was a very friendly man and a very good police officer. It was my pleasure to know him and work with him. May God comfort his family now. He will be missed.
- Barbara McDowell