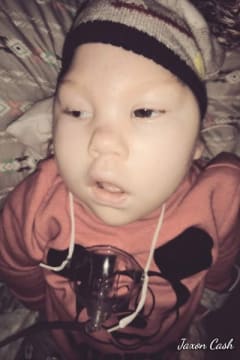 Jaxon Cash Woloszyn, age 3 of Hamilton, passed away in the first few hours of Christmas Eve morning - December 24, 2020.
Jaxon was born in Fairfield, Ohio, on June 19, 2017, to Alan and Lydia Woloszyn.

Jaxon Cash knew more hardships in his short 3 years than most ever do; diagnosed with HIE at birth, and also diagnosed with Cerebral Palsy and Epilepsy shortly after - he had several obstacles to overcome, and spent the first 2 months of his life in the hospital.

However, Jaxon's strength and courage were enough to help him do far more than what any doctor thought was possible. He amazed them, his family, and a small world of supporters as he accomplished so much.
He fought bravely through his short years and never backed down from a fight.

He gave his parents 3 and a half extraordinary years that they'll cherish dearly, but his precious body needed to rest after all he had been through; being greeted with a hug as he joins his older sister Lenore Woloszyn, where they can run and play together without any more medications, pain, hospital visits, breathing treatments, or surgeries. Where he can finally be at peace.

Jaxon is survived by his parents, Alan and Lydia Woloszyn; grandparents, Rob and Jenny Gerard, Dave Woloszyn, and Jane Howell; great-grandmother, Shirley Cochran; aunts and uncles, Rebekah and Aaron Thomas, Mary and Justin Carder, David and Katie Gerard, James Gerard, and Joe Gerard; cousins, Zachary, Abel, Emma, Memphis, Maeve, Bran, Elizabeth, and Victoria. Along with extended family; great-aunts, great-uncles, and cousins who helped surround Jaxon with so much unconditional love and support, and continue to do so through caring for his heartbroken parents.

At this time a visitation will not be held to keep the family he loved so much safe from the pandemic. The family will plan a Celebration of Life later in 2021 to honor the amazing life Jaxon Cash led.