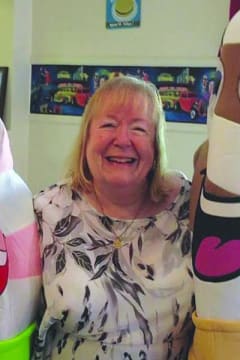 Joy McDaniel Glassmeyer began her life in Heaven on February 16th, 2021. She was born on August 16, 1937, at her family residence in Hamilton, Ohio, to George and Anne (née Peel) McDaniel. By the age of 5, Joy was a regular client of Hamilton’s Lane Public Library, developing a lifelong passion for reading and learning, which would ultimately lead to her profession. Her life was a mirror of the times - Joy and her younger sister, Donna, performed on stage in local USO shows for soldiers during WWII. Tap dancing for the troops was always a point of pride, that she contributed to the war effort. Joy was a woman of rare drive and abilities. She was the first female library aide employed by the Hamilton Lane Library. The Librarian, Gladys Seipen, would become her role model and mentor, helping her realize her dreams of higher education, and awarding her a library scholarship and introduction to Wilmington College. Joy was the first of her family to graduate high school (Hamilton High, 1955), graduate college (Cadet Teaching Diploma, Wilmington College 1957: Bachelor of Science, University of Cincinnati, 1970), and earn a graduate degree, her MEd from Xavier University in 1982. She also took classes at Miami University, including Aerospace, where she had to build a rocket, which her then 6 year old son, Richard had to rebuild it so it would fly. Along the way, she taught. Starting in 1957, she began her career in The Dayton City School System. She would go on to teach in Cincinnati, Hamilton, Pleasant Run, Loveland, and Fairfield City Schools. She created the nursery school program at Northside Presbyterian Church in 1964, spearheaded the Title I reading program for Loveland City Schools and St. Columban Elementary, coordinated the Social Studies program at Fairfield Central Elementary, had her Master’s degree research project become the Math curriculum K-8 at Fairfield City Schools and used throughout the state of Ohio, while somehow managing to raise two children by herself. Teaching was her passion, and her students were all "her kids". She adored them, and they adored her. Her gift was the ability to teach others the wonder of exploring and learning. Teaching facts is easy, teaching a child how to learn, explore and find their own passion for knowledge takes a special and rare teacher. That teacher, for thousands of students and over a 35 year span, was Joy. Joy was preceded in death by her father, George Washington McDaniel, her mother, Anna Mae Peel McDaniel, infant brother, Randy Linn McDaniel, and her beloved niece, Donna Jean (Gregory) Marischen Cooper. Joy is survived by her children Lynne (Kevin Sr.) Kennedy, Richard (Kim) Glassmeyer, and grandchildren Stewart Glassmeyer (fiancee Kirstyn Craig), Kevin Kennedy, Jr., and Emily Glassmeyer. She is also survived by her siblings Donna (Gary) Kinsell, Gary (Paula) McDaniel, and Darrell (Becky) McDaniel, and her nieces, nephews: George (Joy) Marischen, Diane (Dan) Goldstein, Melissa (Terry) Tase, Shannon McDaniel, Michele McDaniel Austin, Jennifer (Aaron) Freed and Gary (Carla) McDaniel. Additionally, grand nieces and nephews include, Matt Marischen; Sara (Sean Lally), Ben (Ashley, and son Archer) and Laura Goldstein, Natalie Cooper, Alex and Delaney Tase, Branden (Caitlin), Kaley and Jayden Austin, Lauren and Ethan Freed; Charlotte, George and Frederick McDaniel. Joy also leaves behind her roommate, and best friend at her care facility, Dora Fields. Joy lived her life in a constant state of wonder and learning, sharing her love of learning to all she met. The Family requests that in lieu of flowers, donations be sent to Children’s Hospital in Cincinnati. Visitation at the WEBSTER FUNERAL HOME 3080 Homeward Way at Rt. 4 Fairfield will be Saturday February 20, 2021 from 10:00 AM until the time of the funeral service at 11:30 AM with Chaplain Kevin Hamilton officiating. Due to COVID-19 concerns masks and social distancing will be required. Burial to follow in Greenwood Cemetery.
www.websterfuneralhomes.com

Joy to me you were the nicest person anyone could ever meet. You were sweet and very thoughtful. It was an honor to meet you. R.I.P. You will be missed.
- Cindymiller
Richard, I am so very sorry for the loss of your mom. Prayers for healing for you, Kim, Stew and Emily.
- Diane Powers