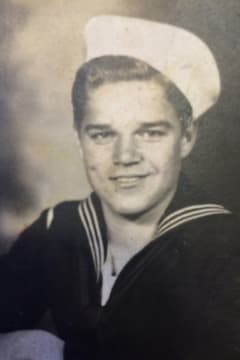 Maynard Britton age 95 of Hamilton passed away Monday October 12, 2020, one day before his 96th birthday. He was born October 13, 1924 in Big Creek, Kentucky the son of the late Maynard and Ada (nee Hacker) Britton. Mr. Britton was a veteran of World War II serving in the U.S. Navy. On October 4, 1948 he married Ethel Sizemore. Mr. Britton retired from General Motors, Fisher Body in Hamilton, Ohio on October 31, 1980. He enjoyed camping, fishing, and being outdoors. He is survived by his wife Ethel Britton; children Cecile (Bill) Webb, Jackie (the late Rick) Eucks, Steve Britton, Gary (Cindy) Britton, the late Bruce Britton (who passed away May 12, 2016), and Kim (Jim) Flanary; nine grandchildren; five great grandchildren; siblings Vontella (the late Max) Whalen, Joby (Arthur) Oody, Ruby (the late Carl) Bledsoe, the late Wilma, and the late Irene (the late Charles) Hines. Visitation at THE WEBSTER FUNERAL HOME 3080 Homeward Way at Rt. 4, Fairfield on Friday October 16, 2020 from 12:00 PM until the time of the funeral service at 1:00 PM, with Pastor Barry Wilson, officiating. Due to COVID-19 concerns, masks and social distancing will be required. Burial to follow with full military honors in Rose Hill Burial Park. www.websterfuneralhomes.com

During a visit to Tennessee a few years ago, I told Jr. that I loved his watch. He said, "Well, a bunch of boys in the park told me they liked it too. I told them if they thought they could take it then to just come on..." The boys thought better of it and walked away. My uncle in his 90's was still a tough guy and still oh so very handsome!
- Patty Britton