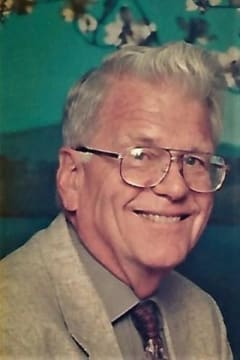 Ralph Raymond Hodges, Jr was born on October 14, 1930 in Hutchinson, Kansas to Ralph Raymond Hodges, Sr and Nellie Herrick Hodges. He was the youngest of three boys. He worked summers on the family farm as a boy and attended scout meetings with his mother to help gather ideas and information that his father used to create the Caravan program that is used by the Church of the Nazarene.
He played basketball in high school and also took up photography. He attended Bethany Peniel College in Bethany, Oklahoma. He married his wife of 70 years on September 30, 1950 before he was to be shipped overseas to serve in Korea with the Army Corps of Engineers. He earned his pilot license and found yet another love in flying.
During his work with Champion Papers, he developed a trim program for papermills that would decrease the amount of waste in each roll cut. He started his own company, Management Decision Development Corporation, and went on to sell his program to papermills around the world. The money from his company didn’t go into just his pocket. There are many students who received free tuition because of his generosity and desire to support learning.
He sold his company and retired at the age of 55. However, he did not retire from working for his Lord. He used the funds to help fund work and witness trips to many countries and also to build the chapel at MVNU. He also donated much of his time and expertise to the Higher Ground Campgrounds where you could find him working on plumbing, electrical, roofing, just about anything that needed to be done.
He also helped to found the Fairfield Church of the Nazarene in the basement of a house on Tallawanda in Fairfield, Ohio. It started with just two families and steadily grew over the years, adding several buildings and the current building at the River Road campus. He was general contractor for each and every portion of the building process.
He has left behind an amazing legacy in his work for the Lord and touched so very many people.
He is preceded in death by his parents, his brothers, Don and Marion, his son, Tim, and daughter, Marcia. He is survived by his wife, Ruth Hodges, daughter, Sandra Richardson, grandchildren Corinne Richardson, Elizabeth Richardson, Stephen Hodges, Michael Hodges, Auna Ehritz, Aven Hodges, and great-grandchildren, Rileigh Richardson, Jocelyn Hodges and Corban Hodges.

In lieu of flowers which will wilt and die after looking pretty for a short time, we would love to have donations sent either to the Nazarene World Missions or the Ralph Hodges Memorial Scholarship at Mount Vernon Nazarene University. This money would then go on to help others in both missions and learning which were both his passions and would carry on his legacy of helping others.
Visitation will be at the Fairfield Church of the Nazarene, 12190 East Miami River Rd., 45252 on Saturday February 13, 2021 from 11:00 AM until the time of the funeral service at 1:00 PM, with Pastor Dan McDowell, officiating. Burial to follow in Rose Hill Burial Park, Hamilton, Ohio. THE WEBSTER FUNERAL HOME, Fairfield is serving the family. www.websterfuneralhomes.com

My heart and prayers are with you, Ruth, and the rest of the family. Ralph was a great soul and a wonderful, generous friend. I'll always be indebted to you both for your friendship across the years. You are loved. Bonnie
- Bonnie Wiseman
Ralph Hodges was one of my heroes of the faith. Though he was a leader in the church at all levels, he truly had a servant's heart. It was not unusual to find him cleaning a bathroom at church on a Saturday night, or digging a ditch at the campground on a hot summer afternoon. His giving was generous and inspired. Building the hotel at the campground was genius. It allowed missionaries and pastors to have a free place of respite while at the same time, providing income and financial security for the camp. Additionally, , I will never forget the Sunday that I was home from college. There were special events planned at church that day and he wanted me to be able to stay. He said he would fly me to school that evening. Little did we know that the airfield near my college was literally a field, no runway. The lights were flashlights held by the farmer at the end of the field. None if that seemed to bother Ralph, He made a perfect landing, dropped me off, and headed for home. I will never forget his thoughtfulness and generous spirit. I have used his life as an example in my teaching many times over the years. He was a great yet humble man.
- Yvonne Baumann
Ralph Hodges was a friend and support to all pastors who served this church here at Fairfield. He was loyal in attendance to worship services, to board meetings, and all other obligations to which he was committed. A part of his desire was to be a faithful steward to help support various organization in which he believed. It was a joy and delight for him to give liberally to his local church at its beginning and to help maintain the church through the years. He always gave above and beyond his local tithe. Not only giving to his local church, but Ralph gave to the Southwest Campgrounds, to get it started and later developed. He gave generously to Mount Vernon Nazarene University and to other district events and denominational programs. Ralph also gave scholarship to all four of my children to attend MVNU. Ralph was known as a Christian steward all his life. It was his spiritual gift! He gave, not to be known as a wealthy person, but it was his Christian obligation. Submitted by Pastor Ray Sharpes
- Rev. Ray Sharpes
Since meeting Ralph and Ruth in their home in 1982, they have been a great blessing in our lives. Ralph served the Lord faithfully in many places, including Pittsburg, Fairfield, and the Carribean. Our lives and those of our family are richer because of his service for Jesus. May the Lord bless and help Ruth and the rest of the family during this time. We know that He will. Chuck and Doris Gailey
- Chuck Gailey