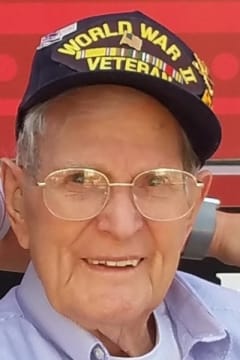 Russell L. Carr age 101 of Hamilton passed away Wednesday June 10, 2020 at Hospice of Hamilton. He was born August 4, 1918 in Medora, Indiana the son of the late Charles and Ruth (nee Winters) Carr. Mr. Carr was a decorated combat veteran during World War II serving in the U. S. Army and was the recipient of 5 Bronze Stars. He was in the U. S. Army Intelligence Unit that liberated the concentration camps at Auschwitz, Poland. On August 10, 1946 he married Marilouise (Humphrey) Carr and she preceded him in death in 2017. Mr. Carr was a member of the Benjamin Franklin Masonic Lodge #719, Order of Eastern Star, and other Masonic bodies. He was a long standing member of St. Mark’s United Methodist Church, where he was a greeter as recently as this March. He is survived by his daughter Willa (the late Roger) Ramsey; three grandchildren David (Amy) Isaacs, Stacie (Tim) Kiep, and Jamie (Melissa) Ramsey; six great grandchildren, Rykiel Lyn, Russell Lloyd, Kari Catherine, Zachary Andrew, Eleanor James, and Jocelyn Marie; and two great great grandchildren, Ryker Lloyd and Ainsley. Mr. Carr was also preceded in death by his seven siblings, his great grandson Tyler Timothy, and his beloved canine companion Toby. Visitation 10:00 AM until 12:00 PM Monday June 15, 2020 at St. Mark’s United Methodist Church, 4601 Fairfield Avenue, Fairfield, Ohio. A Masonic service will be conducted at 12:00 PM Monday at the church, followed by the funeral service with Rev. Joe Payne, officiating. Entombment to follow in the mausoleum at Rose Hill Burial Park with full military honors. THE WEBSTER FUNERAL HOME 3080 Homeward Way at Rt. 4, Fairfield is serving the family. www.websterfuneralhomes.com