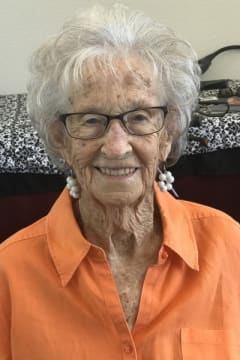 Ruth Robinson age 98 of Hamilton passed away in Roswell, GA on Sunday November 15, 2020. She was born on October 16, 1922 in Manchester, KY the daughter of the late Luther and Daisy (nee Buttery) Rogers. On August 21, 1944 she married Dewey Robinson and he preceded her in death in 1959. Ruth was a schoolteacher in Kentucky and Ohio. She loved teaching children. He legacy though was her steadfast faith in her Lord and Savior. She was a devout Christian where she was a member at North Fairfield Baptist Church for many years. She is survived by two daughters Wanda (Bob) Dallman and Joice (Larry) Whaley; four granddaughters Robyn (Chris) Geron, Melissa Robbins, Kristin St. Vrain, and Alicia (Stephen) Jaynes; nine great grandchildren Emma, Robby, Zachary, Joey, Sally Ruth, Max, Jane, Graham, and Brady; two sisters Bea (Charlie) Hurley and Dorothy (the late Wayne) Halcomb; one brother Arnold Rogers. She also leaves behind many nieces, nephews, other family and close friends. She was also preceded in death by twelve siblings Viola Goos, Rosa B. Hibbard, Lucy Garrett, Edward Rogers, Maxine Sawyer, Mary McKibben, Jimmy Rogers, Herbert Rogers, Alden Rogers, Dewey Rogers, Margaret Anglin, and Lawrence Rogers. Visitation will be on Monday November 23, 2020 at North Fairfield Baptist Church 6853 Gilmore Rd Hamilton 45011 from 10:00AM until the time of the funeral at 11:30AM with Dr. Mark Wilson officiating. Burial to follow in Rose Hill Burial Park. Online condolences can be made at www.websterfuneralhomes.com In lieu of flowers donations may be made in Ruth’s name to North Fairfield Baptist Church at 6853 Gilmore Rd Hamilton OH 45011 or www.northfairfield.com/financial-support/ or Aloha to Aging Inc 1612 Morningside Trace Marietta, GA 30062 or www.alohatoaging.org/ways-of-giving/donations/

Growing up there are a few teachers who stand out, who have a lasting impact on your life, who in adult life become friends. Ruth is just such a person. She knew our siblings and our parents. Ruth joined our VanBuren Lunch Girls group. We had grown up, got married and had children. In her soft spoken caring voice she continued to have a loving impact on our lives, no longer as our teacher but as a friend. She shared stories of her life, her children and her Lord. We will forever be grateful for the loving friendship of this wonderful lady. Her family is in our thoughts and prayers.
- Norma Apgar
Wanda, I am sorry for the loss of this wonderful lady. She will always be my "Red Shoe" friend.
- Donita
You will be missed dearly, love you.
- Alene Glass
Thoughts and prayers for the family. What a great lady. May Ruth Rest In Peace. Cliff and Gloria Migal
- Clifford Migal
Aunt Ruth was always so classy . I have always been proud of her , she was my 4th grade teacher.
- Marie Hibbard