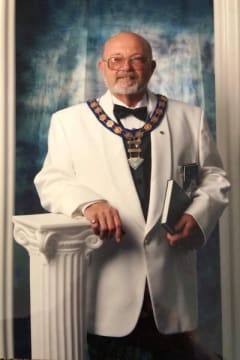 Thomas S. Bevington age 76 of Hamilton, passed away peacefully surrounded by family on Friday October 23 in Amelia, OH after a short bout with cancer. Born Richard Lee Adams Mallory on November 6, 1943 to Betty J. Rinck Mallory in Cincinnati, he was adopted by Stanley and Minerva Bevington in the spring of 1944. Mr. and Mrs. Bevington provided the newly named Thomas Stanley Bevington with a wonderful and loving home. A graduate of Taft High School, he earned a B.A. from the College of Mount St. Joseph in 1990. He was employed with the Ohio Department of Transportation for 31 years before retiring in 1992. Since 2004 he worked as a staff guardian with Personal Guardianship Services in Cincinnati. Tom was civic minded, serving his community in several capacities, among them are: an Advisory Board member of the Hamilton Salvation Army 1986-present; member of the Butler County Board of Zoning appeals 1995-present and as a business special deputy of the Butler County Sheriff’s Department 1990-1994, and 1998-present. Freemasonry played a large role in Tom’s life. He was a Master Mason with Marathon, OH Lodge #203 and the former Brownsville, IN Lodge #70 (Past Master). He was the Past High Priest of the Chapter of Royal Arch Masons (1995), the International President of High 12 (2007-08) and the State President of the Ohio Grotto Association (2017) He is survived by his wife of 30 years, Wanda of Amelia, Ohio; one son Scott (Diana) Bevington of Connersville, Ind.; one daughter Tracy (Shawn) Oyer of Oregonia, OH.; one step daughter Mitzi (Lee) Kinnard of Bethel, OH.; one step son USCG Petty Officer 1st Class Troy Morgan of Saginaw, MI.; eight grandchildren and five great grandchildren; one brother Tom (Judy) Ellis of Hamilton, OH.; six nieces and nephews; his aunt Irene “Kris” Yelton of San Diego, CA., and his beloved dogs Luci and Sadie. He was preceded in death by his parents, biological mother, and a stillborn sister Judy Lynn. Visitation 5-7 PM Monday at THE WEBSTER FUNERAL HOME 3080 Homeward Way at Rt. 4, Fairfield. A Masonic service by the former Brownsville, IN. Lodge #70 and assisted by the Liberty, IN. Lodge #58 at 7:00 PM followed by the Cincinnati Scottish Rite Ring Ceremony. The funeral service will be held at 10:00 AM Tuesday October 27, 2020 at the Ross Community United Methodist Church, 2943 Hamilton-Cleves Road, with Pastor Kym James, officiating. Burial to follow in Greenwood Cemetery, Hamilton, Ohio. www.websterfuneralhomes.com

Our prayers are with you just now. Springfield Masonic Community High Twelve Club #483.
- Bruce Vincent
Anna and I were sorry to hear of Toms passing. We will keep all of the family in our prayers. Tom was a good man and a good friend. We miss him now but look forward to the reunion. Love to all the family. Uncle Bob and Aunt Anna
- Robert Jones
Our prayers go out to you and your family during this difficult time. Tom always had wonderful stories to tell and was kinder than can be; He will be missed dearly.
- Ashleigh C.