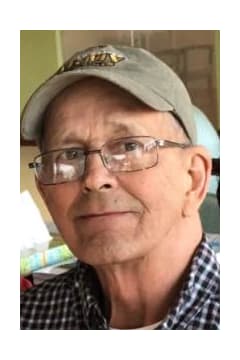 William E. Tegeder, age 72, of Hamilton passed away Monday October 14, 2019 at Hospice of Hamilton, after a long battle with cancer. He was born October 1, 1947 in Lockland, Ohio, the son of the late Lawrence H. and Grace L. (nee Anderson) Tegeder. He was a veteran of the U.S. Army and served honorably in Vietnam, earning many accolades, including the Purple Heart Medal. Mr. Tegeder worked for John Morrell Company for many years. On August 9, 1969, in Arlington Heights, Ohio, he married Barbara Kay Vaught. He is survived by his wife Barbara Tegeder; his children Kristoffer (Stacey) Tegeder and Holly (Andrew) Gerth; grandchildren Julia, William, and Marley, and his brother Mike Tegeder. He is also survived by many nieces, nephews, and other family members and close friends. Visitation will be held at THE WEBSTER FUNERAL HOME 3080 Homeward Way at Rt. 4, Fairfield on Friday October 18, 2019 from 4:00 PM until the time of the memorial service at 6:00 PM. Full military honors to follow at the funeral home on Friday. In lieu of flowers donations may be made to Animal Friends Humane Society, 1820 Princeton Road, Hamilton, Ohio 45011. www.websterfuneralhomes.com

Please share a condolence, photo or memory of William . We welcome all condolences that are positive and uplifting that will help family and friends heal.